When it became clear that Humanity would lose a straight-forward
shooting war with the numerically and technologically superior Covenant
forces, the UNSC Special Operations Command and ONI resorted to more
stealthy hit and run missions whenever possible. Typically a relatively
small strike team composed of highly trained ODST or augmented Spartan
II and/or III soldiers would be stealthily inserted and tasked with
performing a lightening surprise attacks or sabotage missions on
strategically significant Covenant targets.

Now over the course of recent human history spanning 600 years of modern
warfare, these sorts of battles had been fought by elite commandos
using sound suppressed weapons and stealthy tactics so as to avoid
alerting the garrisoned enemy force. When our current day ODST and
Spartan Spec-Ops warriors used these tactics to engage the Covenant, we
discovered that even the powerful and accurate suppressor equipped M392S
SOPMOD DMR was ineffective against the larger member species. The
7.62x51mm FMJ-AP round which is highly effective against conventionally
armored human targets or less robust Covenant troops like the Unggoy or
Kig Yar, failed miserably when it came to making mission critical single
shot kills on Sanghelli or Jiralhanae targets. Even with custom "hot
loads" these physically larger, higher caste Covenant are equipped with
heavy armor and energy shielding which completely absorbs/deflect the
first shot protecting the wearer from harm. A gifted marksman might
manage to get off the two or three head shots in quick succession
required to kill an Elite or Brute with a DMR but by that point, the
enemy has typically managed to raise the alarm compromising the mission.
It became apparent to our forces in the field that if one were to have
any hope of a single shot kill against Jiralhanae or Sanghelli, they
would need a much bigger gun.

As a result, UNSC and ONI Spec-Ops operators whom normally prefer to
travel light found themselves having to resort to the use of the
outsized SRS-99 anti-material rifle made yet more cumbersome with the
addition of a large attached sound suppressor in order to achieve the
required single shot kill against Sanghelli or Jiralhanae targets.
Besides the SRS-99's weight and bulk, there are other drawbacks with
using this weapon in this role. The large 14.5x114mm APFSDS round's
extreme velocity leaves a visible contrail hanging in the air for
several seconds after the shot, visibly exposing our sniper's position
to any enemy unit that happens to glance in that direction. Finally
there is the problem of extreme over-penetration. The tungsten
penetrator may potentially pass right through the intended target's
defenses and cranium and impact with surrounding objects explosively.
While the report of a suppressed SRS-99 may be relatively quiet, it
still isn't very stealthy...

So our spec-ops forces requested a significantly lighter, more compact,
yet still rugged rifle with integrated suppressor and simplified optics
for the stealthy engagement of targets at medium to long (but not ultra
long) range. After necessarily rapid development, the end result is the
"highly" classified SRS-103S and accompanying 14.5x114mm APFSDS-SS
ammunition. It was co-developed by ONI's own armorers and Misriah
Armory's "Special Projects" division. The weapon is currently produced
in very small numbers exclusively for the use of ONI and UNSC Special
Operations Command ODST and Spartan covert ops teams and will remain a
classified ordinance for the foreseeable future.

Compared to the the shortest barrel option for the SRS99 with an
attached suppressor, the SRS-103S is 45cm shorter in overall length
making it easier to stow in an SOEIV. It is also 3.5Kg lighter, achieved
through the reduction in size and use of costly titanium alloys and
composite construction. These two factors make it much easier to handle
in the field than the SRS-99. In fact the SRS-103-S is only 25 cm longer
and 2 kilos heavier than the SOPMOD DMR. Standard optics are a 5X
magnification scope with switchable low light/night operations
capability and laser range finding. In the interest of both
effectiveness on target and commonality with existing weapon systems,
the new rifle is chambered for the same 14.5x114mm APFSDS ammunition and
4 round magazines used in the existing SRS-99. However, the new rifle
has the option of using a stealthy subsonic ammunition variant specified
as 14.5x114mm APFSDS-SS with a reduced propellant load. Between the new
rifle and new subsonic ammunition, all our operators' criticisms of
using the SRS-99 in covert support roles have been addressed. The
visible contrail created by the bullet path has been eliminated and the
likelihood and degree of over penetration of shielded and/or heavily
armored infantry targets (with the noise which that can entail) has been
significantly reduced.

Of course the shorter barrel and reduced bullet (penetrator) velocity
reduces the weapon's maximum effective range when compared to a
suppressed SRS-99. In the hands of an elite marksman, the SRS-103S will
achieve single head shot kills on energy shielded and/or heavily armored
targets at distances under 500 meters 98% of the time with subsonic
ammunition. With standard non-stealthy loads, the new rifle will
maintain the SRS-99C-S2's potency at distances up to about 800 meters,
or about one half the range of the standard SRS-99 when equipped with a
suppressor. The reduced range is felt to have been a good trade-off as
distance to target in these sorts of mission profiles seldom exceeds the
effective range of the new rifle, even with subsonic ammunition. 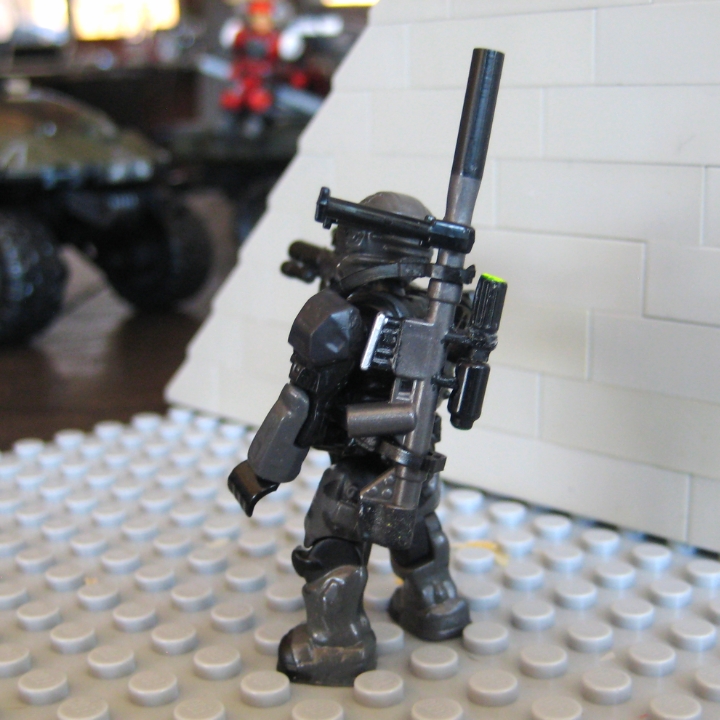 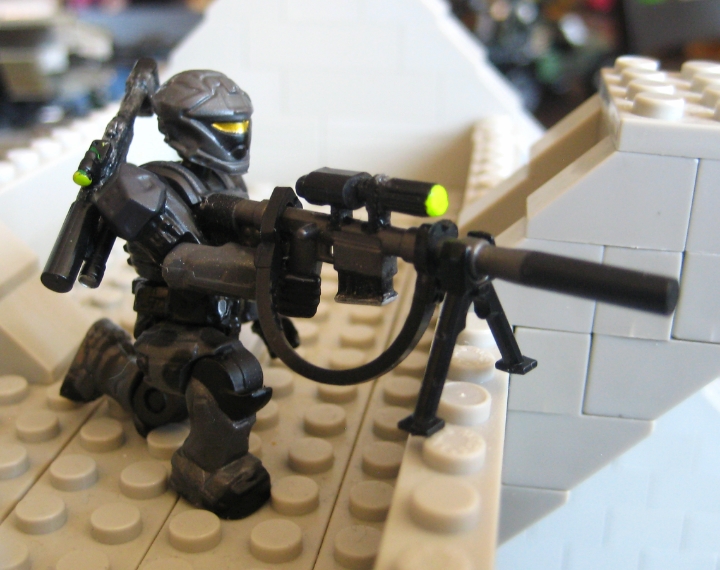 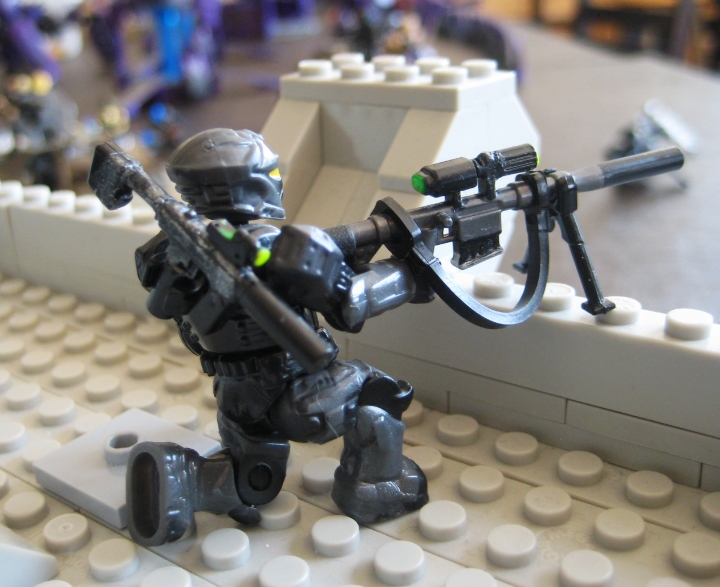 Nice stuff. What did that start out as?

The base rifle is a Si-Dan M103 sniper rifle from Minifigcat.com. FYI, this is one of my creations which I was hoping to have cast...

The strap made me think it may be a minifigcat gun, but I wasn't sure.

I sent you a response to the casting query.