I've been working on this commission for PeteRock (the guy who replicated firebase over on BF) for the better part of 8 months now; though very sparingly in my free time. Well, after months and months of putting it off I finally put the last drops of paint on it over the past two days.

Only made one image of the pictures as the about-face pretty much sums up the detailing.

The thing that amazes me most about this figure though actually isn't all the time or work I put into it, but that it's a representation of how far I've come in my painting abilities (thanks to my mentor Yrkane) since I first set out on this project. When I started I could get straight lines and smooth paint applications on figures, but my washes were always inconsistent and I couldn't get minor details onto the figures. Now I'm able to really make figures 'pop' with finer lines and accented features (like LEDs on the armors), though not really displayed on this figure as I'm eager to get it over to him. 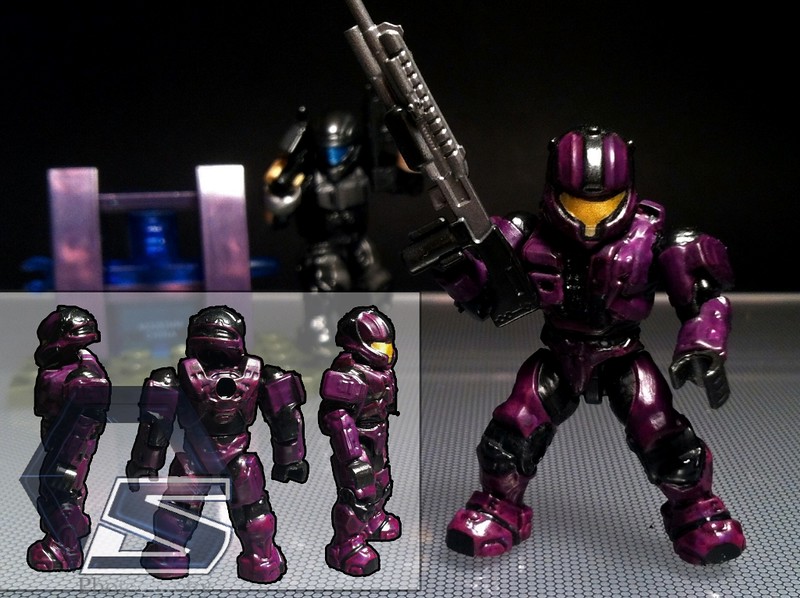 [DISCLAIMER: I won't be spreading this picture to other forums so I'd appreciate it viewers would acknowledge this wish so you don't ruin the surprise.]

(I think next time I'll add more minor highlights/accents to a commission like this though-such as LEDs, caution lines, etc.)

Excellent job. The lines on his head are spot on and the wash looks like it was factory made. I've always enjoyed your pop-n-swaps/repaints. It looks like you took your time and did lots of thin coats to avoid "chunky" paint syndrome.

Thanks Bloggy! your comments are appreciated

I don't think I've ever worked on a custom piece as long as I have this one and actually finished it; so that act in itself is an achievement for me.

If it's one thing I can't stand about OPP customs, it's when you see a perfectly well designed piece marred by chunky paint. I used to think it was an issue with specific types of acrylic until I was taught it really just requires a little water in your bristles; and more patience to let the paint dry.

I still have found some brands to be particularly difficult at getting the paint to adhere to the plastic over time (Citadel), which is a shame considering they have the best variance of colors offered. I've found that with a nice sealer coat I can get the paint to last quite a while nowadays though. Still it's a bugger when going for a close-up shot and seeing minor paint wears in post-op editing

Anyway, this beautiful custom is made infinitely more beautiful by the awesome photography acompanying it. Seriously, At first glance I thought It was an official 3D rendering from 434. Gobsmacking work and well worth all the love you gave it.

What, you're not down with OPP? Heh heh..

I believe he means "other people's" in this case.

Emerald-shine wrote:At first glance I thought It was an official 3D rendering from 434.

blogness wrote:
What, you're not down with OPP? Heh heh..
I believe he means "other people's" in this case.

And yes, I was abbreviating "other people's paint" customs.

Emerald-shine wrote:At first glance I thought It was an official 3D rendering from 434.

No....come on dude what do you take me for? Ive been snorting it of course!

You're doing it wrong! All the cool kids are mainlining it, duh!
LoL
/thread derailment