You used a jackal for Bill?

So incredibly thin! So top heavy! How does she stand?!?!

She got junk in the trunk to balance that snack pack

That's got to be the most buff anorexic woman with implants I've ever seen! Her arms, legs, and breasts are all thicker than her stomach. Amazing conversion as far as I can tell... but sending an even worse message to our impressionable girls about body image (wonder how she stacks up compared to a regular barbie's "real world dimensions". You've really gone and done it.


And you're the first of us old men to spread Barbie's legs and fill that slot... so wrong. I know some of us thought about and some even talked about it... but you went and did it. How do Cortana's legs fit?

Maybe if you painted her to be Latina... wait... what?

Just saw I missed some too... including the lute! I don't own one, but I was thinking about a mega scale one while watching Dune (the miniseries) last night. Maybe as the musician of the group I should take it upon myself to find out what instruments are available and which need to be sculpted/cast.

Haven't actually tried Cortana's legs yet. i think they'll fit slightly better, but may make her hips too narrow for her shoulders. I think I already mentioned somewhere that her arms have larger pegs, so can't be used with Barbie unless you do some dremeling.

BTW - between Brickforge and the MB Smurfs, there's actually a fair selection of instruments. LEGO even has a bagpipe, now.

LOKACollector wrote:Haven't actually tried Cortana's legs yet. i think they'll fit slightly better, but may make her hips too narrow for her shoulders.

been wondering if the feet can be attached to upper legs? i've tried sanding a regular marvel upper legs which is the only one available for me now, and haven't seen anyone tried cortana's lower feet attached.

The problem is that they're so much thinner. They make her look like she's wearing jams. Might work well with a skirt. I'm actually really afraid I'll break my Cortana if I try to take her apart many more times. Once I get my hands on some more Cortana parts, then I'll get crazy.

I now have a Barbie with thin arms and legs! Need to rework the waist articulation to get a better angle, and she's still a bit too tall - but I've done it!!!

And here she is: 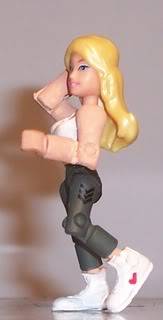 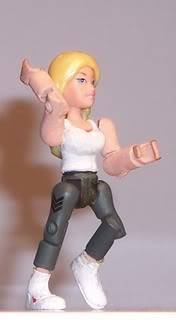 Needs some rounding off at the knees and the aforementioned adjustments, but she's definitely looking less unbalanced.

you better check her now and then wherever you put her on display... those serpent men are slippery. Great work with her!

Thanks. Hoping to get her finalized tomorrow. Depends on whether this flu really takes hold.
...And whether I can find my PVC glue.

Does that mean her thighs are in command? Yes Sir, Sergeant Hips SIR!!

^I think you're thinking of PFC.

Oh wow, so much I can say besides great work, but I'll keep the innuendos at bay.

So the thin legs I love, are they actually arms (from what) upside down? Love your thinking outside of the box. You just gave me a great idea how to make DBZ legs with articulating feet!

Yeah, I didn't really try to hide it. In fact, for better proportions, I should have used the arm arms for the legs and the leg arms for the arms. I'll let you try and work out the source

That's what I thought but you never know with the easy answers.

or a fav+ please

Just a heads-up:
Still haven't heard back from a customer who commissioned, or planned to buy, a large percentage of these. If I don't here from him soon, pretty much all Marvel figs will be going up for auction.